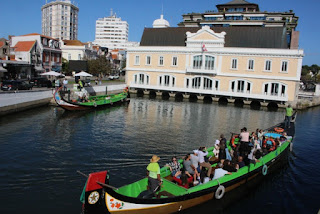 No, we are not in Venice, Italy in a gondola. We are in Aveiro, the "Venice of Portugal" in a boat, a barco moliciero, once used by fishermen to collect seaweed as fertilizer for their gardens. Our guide, a charming young lady from Columbia, South America, is telling us all about Aveiro, a small city set on an Atlantic coast lagoon, Ria de Aveira. We are navigating through several canals learning that Alveiro was a center of salt and trade by the Romans long ago plus enjoying the varied architectural styles of the canal-side houses. It is still an industrial city and an important port, but tourism is increasingly important. Gondola-style boat after boat pass us as we make our way through the five canals between the town and the sea.

It was only about an hour from Porto to Alveiro, the perfect place to take a break from our trip from Porto to Coimbra. We enjoyed a good lunch, walked some of the streets and of course, the boat ride was the perfect way to get the true flavour of the city. It was later in the afternoon by the time we continued on to Coimbra. 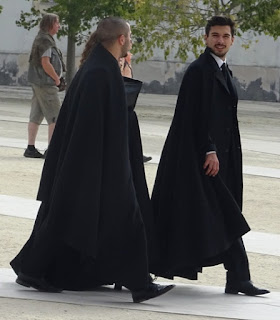 I recognize those fellows. They are wearing the traditional black cloaks, called "Traje" attesting to the fact they are students at a Portuguese University. In Porto, they are nicknamed "bats" for their cloaks. After a first year student participates in a "Praxe", an initiation ceremony, they are permitted to wear the full formal outfit, consisting of the famous black, wool cloak, a black jacket, white shirt, black tie, black pants for men and black skirts for women. The cloaks were an inspiration for the gowns worn by J. K. Rowlings Harry Potter students, but they are also similar, but in a lighter fabric than wool, to the gowns we wore to class at Bishop's University in the 1960s.

We arrived in Coimbra the previous evening, staying at the conveniently located Stay Hotel. Coimbra is home of the oldest university in Portugal, founded in 1290, so a visit to Coimbra University, situated at the top of a hill was a must. We took a taxi up the hill to the University and bought tickets to visit the famous library. The University is an impressive compound in a formed Royal Palace, in use when Coimbra was the capital city of Portugal. It was an interesting visit. We took in the Grand Hall, where students attend formal ceremonies, such as graduation or defending a thesis, all outfitted in the full traditional outfit. Down the corridor from the grand hall was access to a narrow observation platform stretching around two sides of the roof with a great view of the city. We made sure we were at the door to King João's Library at our appointed time, as late arrivals were not permitted entry. The library, reminiscent of the Spanish libraries in Mexico, holds 40,000 volumes and is one of the best surviving 18th C Baroque style libraries in Europe.

We walked back to the top of a funicular that took us right to the center of the old town. We took in some of the the sights along the way and ended at the Church of Santa Cruz, next door to Cafe Santa Cruz. The Cafe, originally a church, was de-consecrated in the 1830s when monasteries and other religious buildings were taken over by the government. Every evening at 6 PM the Cafe is host to a free Fado performance, performed in the space occupied by the altar. We made a reservation to attend that evening and were glad we did. We ordered a carafe of Sangria and sat back to enjoy the Fado ballads performed by an older gentleman who organizes the events. He was accompanied by a classical guitarist and a traditional Portuguese guitarist, both very accomplished. The performance made up for the disappointment of our Porto experience.

After the Fado performance, we were ready for a good dinner at the Restaurante Solar de Bacalhua. Cod is their specialty and it was very good, ending an enjoyable stay in Coimbra.

The next morning we left Coimbra heading for the seaside town of Nazare and ending in Obidos, a the hilltop walled town.
Posted by Jeanne and Ray at 2:53 PM