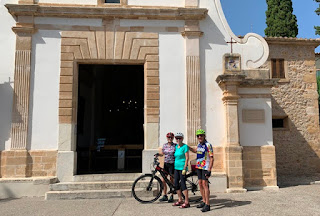 Ray, Margaret and I are speeding up the switchbacks to reach the small chapel in Polença. A struggling biker looks rather envious as we pass him easily. We have rented eBikes and they make a long, steep hill a piece a cake. We had come to Mallorca on the recommendation of our friends, the Potters, who had stayed on the island several times to ride the well-marked roads and test themselves on the hills. We came to see the countryside and to try a few hills. We are no longer good enough to join the big league bikers. You still have to pedal an eBike, but there is nothing like a small motor on a bike to make you feel like a real pro.

We flew from Lisbon via Madrid on September 13, where Ray and I and the Andrews met up with Marg and Jack Dunphy in the Madrid airport. The Dunphys had just visited their daughter and family in their new home in London, England. 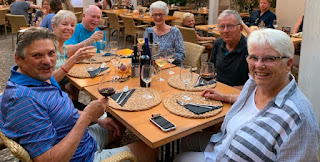 The six of us arrived in Palma Airport after 5 PM, rented cars and drove to the three bedroom house we had rented, through www.homeaway.com, in the old, walled town of Alcúdia.  It was dark by the time we got to the house and we were all hungry. As soon as we had moved our suitcases into our bedrooms, we set off to find a restaurant still open for dinner. We lucked out. It was still warm enough for us to choose an outdoor restaurant in one of the small plazas near our house. The food was good, the staff friendly and the atmosphere just perfect. We knew we were in for a good week.

Each Sunday and Tuesday, a large outdoor market takes place around the main entrance to Alcúdia. The timing was perfect. We needed to buy food for our communal dinners and the produce on offer was fresh and inviting. There was also a super market near by where we could purchase everything for our breakfast, snacks and dinners that the outdoor market didn't supply.


After lunch, we found our way to ECO Bikes near Alcúdia Beach and picked up the five eBikes that Ray had reserved for us. Unfortunately, Jack Dunphy was not able to bike this year. Even after two back operations in the past and heart surgery last winter, Jack was determined to join us in Mallorca and Portugal, but he was not biking. The five of us got fitted on the bikes and took off for our first orientation ride along a quiet road parallel to Alcúdia Beach. There were still many people enjoying the sun and the sea, mostly families with preschool children, as holidays were over for school aged children.

We all biked back to our house and settled into our new home. On the main floor was a good sitting area, a fully equipped kitchen with a small table and a good-sized outdoor patio, big enough for all six of us to enjoy our dinners together. Yes, we took turns preparing dinner for the group, with great success. The main floor also had a double bedroom with an ensuite and there was a large entrance hall that became very useful to store all the bikes. The upper floor had two more bedrooms, sharing a large bathroom. We were very comfortable.

We discovered what happens when eBikes are left outside in the rain. Unknown to us, a severe rainstorm hit Mallorca, closing the airport for two hours on Friday morning, the day we arrived in Mallorca. The eBikes were all rented by a group that got caught in the rainstorm. They found shelter from the rain, but the bikes all got soaked. Our second day in Alcúdia we prepared to go for a ride on our newly recharged bikes. The motors on several of them did not turn on. Back we rode to the bike shop in Alcúdia Beach. It was then that the shop recognized the problem. The contacts between the bikes and the motors had started to corrode. The solution is easy, if you have the materials in your bike kit. You need fine sandpaper to clean the corroded contacts and Vaseline to coat the contacts, preventing another motor disconnect. We should have carried sandpaper and Vaseline with us as the problem persisted.

Ray discovered another glitch with the motors. He is too speedy. Spain has decided that any motor vehicle capable of travelling more than 25 km/hr is designated a motorcycle and requires special training and license to operate on the roads. Therefore all eBikes in Spain have to be set such that the motor ceases if travelling above 25 km/hr. From then on, we just had to slow down a bit if we found we were travelling on flat roads above the limit. If that happened when we were descending one of the many hills in the area, it could just be ignored because we didn't need the power assist until we reached the flats. We certainly enjoyed the ability to climb hills without being exhausted.

Most days Ray, Margaret and I spent the day exploring more towns, most within the vineyards and market gardens but a few more, besides Polença, at the top of a hill. One day the three of us biked along the coast to Port Polença, where windsurfers and kite surfers braved the waves. We had lunch in the beach community and headed out for our first exploration ride.

Another day, we explored both the coast just east of Alcúdia Beach and the north side of Cape Victoria. We stopped at Albergue de la Victoria, once a convent, now a hostel.  A chapel below the hostel was being decorated for a wedding. We had a chat with the British Anglican priest who would perform the ceremony. He told us he was on a break in his capacity as representative to both the Church of England and the Vatican in Africa, where his main duties were identifying and burying victims of the recent wars.

Ray and I biked on our own to Cala Sant Vicenç, a lovely cove with two small beaches set between steep hills. Ray was all set to bike to Cape Formenter, but decided not to, much to my relief. It would be necessary to start at first morning light to avoid the traffic lineup of tourist buses, cars and cyclists all heading to the top for the view.

Those not biking took road trips, once to Port de Sóller and another day to the top of Cape Formenter for the incredible view. Both destinations brought back rave reviews but the Formenter trip took longer than expected by car due to the traffic and numbers of cyclists on the narrow switchbacks.

Mallorca is another place we didn't stay long enough. It is back on the radar for another visit.

From Mallorca we all flew to Porto, Portugal to meet the rest of our group and spend a week at a villa.