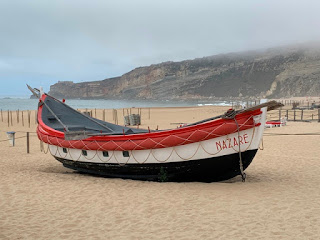 Suzanne and David suggested we visit Nazaré beach on our way from Coimbra to Óbidos. They had visited the town several years ago and wanted to see if it had changed very much. We arrived via the beach road, and immediately noted that the surf was up and a few surfers were riding the waves. A "photo of the week" in the Globe and Mail Sports Section,Saturday November 23, brought back memories of Portugal. Apparently the underwater Nazaré Canyon causes huge waves to form along this part of the Atlantic coast. There must have been some storms the week the photo was taken as the photo depicted a large crowd watching the surfers from the upper town bordering the beach. As we learned in Puerto Escondido, Mexico, another surfing Mecca, the word spreads in the surfing communities as soon as the weather patterns predict the best surf for aficionados.

The upper town built on the top of the cliff was shrouded in fog the day we were there. That meant a funicular ride to the top of the cliff was not in our plans. Instead we walked the beach, admiring the collection of small boats, used by the fishermen going out for the sardines that frequent those waters. A local woman, sitting on the beach, was hoping for sales of fish drying in the sun on large frames. We found a good beach side restaurant serving seafood for our lunch. Suzanne had fond memories of sardines cooked on a fire right on the beach promenade. The restaurant didn't offer sardines cooked the traditional way but we did see a man tending a fire on one of the side streets in the beach front town.

After lunch it was time to continue on to Óbidos, where we had reservations for the night. 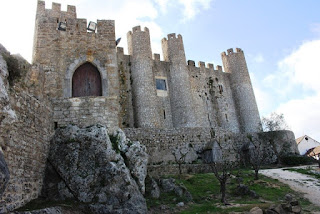 
All's well that ends well. We were given directions to our small hotel in Óbidos: "follow the signs to the castle". That sounded easy. It wasn't. We circled the hilltop fortress, a few times, trying once to go the wrong way, much to the ire of a local taxi driver. We ended up at the south end of town, even when we thought our accommodation was at the north end. Ray and I volunteered to find our lodging. We were directed to one place that turned out to be a sister of our lodging. Ray went back to stay with the Andrews in our car and I walked through the village and found Casa de Sao Thiago do Castelo, right next to the castle at the north end of town. When I explained that the rest of our group was waiting at a parking lot at the other end of town and we didn't know how we were going to find our way to the hotel, Alice, the receptionist, came to our rescue. "l am going off duty in a few minutes and I can show you the way on my drive home", said Alice. I drove with her all the way down to where the others were temporarily parked, making sure I knew the route back to a parking place near Casa de Sao Thiago. We made it, but we couldn't have done it without Alice's help!

Óbidos was established as a Roman settlement at the base of the escarpment, on which the town exists today. The town, later built and fortified on the ridge, became known as the "wedding city" when King Afonso II gave the title of this village to Queen Urraca in 1210 on their wedding day, establishing a tradition for later kings to deed Obidos to their bride on the wedding day. The town now survives as a National Monument and a tourist attraction, popular for commoner's weddings. The castle is now a "pousada", a boutique hotel with nine rooms. The town has recently been named "the City of Literature" with several book stores, one in a former church, and a literary festival that was to start the week after our departure.

Our small hotel, just eight rooms, was within the walls of the town, just below the Castle. Our rooms were very comfortable and the hotel was close to everything in town. We had time that afternoon, after the busloads of tourists had left, and the next morning to wander the streets of town and walk part of the walls that surround the small village before the crowds arrived. We learned to avoid the crowds by exploring the side streets while the vast majority of day tourists kept to the narrow main street.

A recommendation we followed up on was to sample, Ginjinha d'Obidos, the local cherry liquor accompanied by dark chocolate. It was sold at several spots on the main street and tasted like more.

We celebrated the end of our visit with a very nice lunch of pizza at Bar Lagar da Mouraria, located inside an old wine press  house. After lunch, we drove to Lisbon airport in time to get our flight back to Canada.

We all enjoyed our visit to Portugal, but we really only tasted what the country has to offer. I would love to go back and visit more of the country again.