Boom and Bust in PoMo 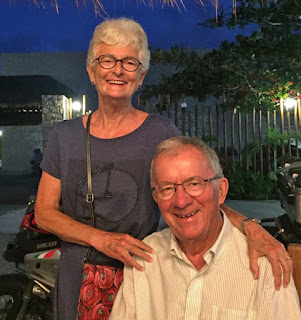 Thank goodness the seaweed problem, especially the abundance of Sargasso seaweed has been solved, we thought. The town of Puerto Morelos has installed a boom about the entire length of the town from the famous leaning lighthouse north to the town limits to prevent the seaweed from reaching the beach. There were consultations with the advisors of the National Protected Marine Park which encompasses the ocean between the reef and the town beach. The boom was installed so that the marine life were still free to make their way under the boom to their usual feeding areas closer to the beach. We were happy as we could still swim from the shore with our snorkels and enjoy the abundance of fish grazing on the large coral rocks not far from shore. We did this every day, until the dreaded El Norte arrived from Canada, we are always told. Especially strong winds reconfigured the beach. In the space on one day, Instead of drop off shortly after entering the water, the beach sloped gently into the water. We didn’t lose any of the sandy beach, it was just a more gentle slope. The boom, preventing seaweed from reaching the beach, was no match for the winds. It broke in several places and most of it had to be towed away to the dump.

It still marginally affected our swim and snorkel routine. The stronger winds brought stronger currents which we managed to master for several days, until the winds kicked up the sand, obscuring our vision and preventing the fishing and snorkel boats from venturing out. We just took a few days off from swimming, but continued our favoured walks down the beach. Eventually, even more of the boom was carted off to the dump, but the result wasn’t as drastic as we feared. Yes, sea grasses still made its way to shore but in manageable levels. The town was still able to sweep up the worst and the beach was just as lovely as ever. Our only gripe was the continuation of high winds, preventing us from swimming out to our favourite rocks, looking for some exotic fish we had not noticed before. 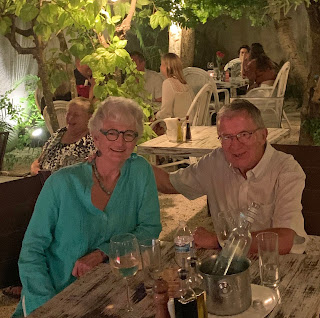 In the meantime, we enjoyed our 54th Anniversary dinner at Tanino’s Restaurant on December 30th when a talented duo provided us with Jazz and Blues music. 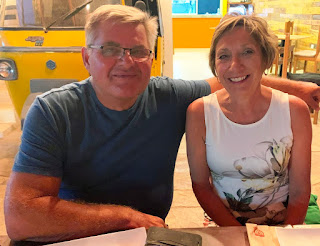 We also renewed our friendship with beach friends we had met last year and enlarged our circle of friends, all of whom we hope to see again next year. There were Maurice and Susan from a small town north of Brandon, Manitoba, Paul and Anelia from Vancouver, Loyce and Gilles from Lac Megantic, Earl and Flo from Saskatchewan and many more.

I returned to Spanish lessons once more. My teacher, Maria Antonia, from Cuba had me working hard. 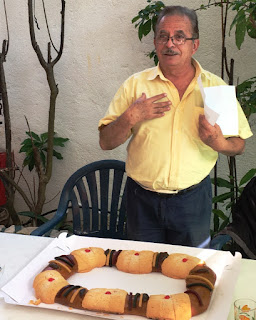 A special treat was celebration at the school with Victor the director of the school, to celebrate La Dia de los Reyos Majos, January 6, the day when the Three Kings visit the baby Jesus.
My teacher, Maria, also invited her student to share the celebration in her home. (Maria is 3rd from the left, next to her mother, with whom she lives. Ray was happy to share in the celebration as well. 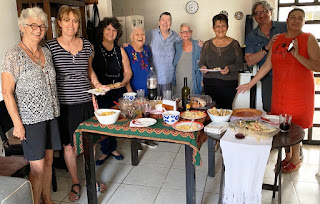 A special cake, in the shape of a crown, is prepared to share with family and friends. Good luck for the year is guaranteed for those lucky enough to find a small, plastic baby Jesus in their slice of cake. It was not my lucky year, but I am not worried.

I was glad when there was more than just me to struggle with remembering everything I had learned before but had inconveniently forgotten. If I chose to continue next year, I hope Marti, from Colorado and Daniel, from Montreal, are in my class. I left with advice to practice, listen and read Spanish.

Patti still has her yoga studio in Puerto Morelos and I thoroughly enjoyed my sessions. I will be sure to continue with Patti next year.