More Than Entertainment in Zihua

This blog is an ode to our friends in Zihuatanejo with whom we are so impressed. Yes, we all come to Zihuatanejo to enjoy the beach and to enjoy the many concerts offered, but there is more than pure entertainment behind the events we attend. The organizers of many of the events volunteer their services and donate the entire proceeds to support local causes. In addition, many people spend a good number of hours directly helping others less fortunate than themselves.

What I am writing is just part of what visitors are doing in Zihuatanejo.

We get to know the local people who work in the restaurants and roam the beach selling their wares every day. We get to enjoy their company and think about how we can help them and their children in their lives. It may be just buying the wares they sell but for many of our friends, it is much more. 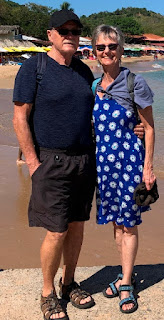 "What have you got in the bags," we asked Sandy and Ron Johnson, who had just arrived from Vancouver BC. They were carrying two large shopping bags to the beach.
"Oh, one bag is school supplies for school children here, and the other bag is children's clothing. Air Canada allowed us to check two bags of 50 lbs each for no charge, as long as they were charitable donations. In addition, Ron and I both brought carry-on bags with school supplies. Our friends, Albert and Michelle Lamonthe volunteered to carry another 50 lbs of school supplies in their 5th wheel for us," they tell us.

Sandy continued with more of  story: "After we returned from Mexico last year, we talked to our nieces, Lucy (12) and Piper (9) Dunbar, about our experiences. Lucy made a power point presentation about the need for school supplies and back packs in Zihuatanejo, and presented it to two Grade 7 classes in her school. The response from her fellow students was terrific. Both girls also did a great job of culling their own outgrown summer outfits and collecting more specially selected used clothing for the children here," she said. 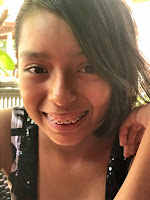 Sandy and Ron told me that they are helping some children even more. Last March, they had become friends with young Amayrany Soldano Sotelo (12), her two younger sisters, Manuela (10) and Lupita (5), and their mother, Magdalena, who supports her children selling ceramic bowls, purses and other items on the beach.
Amayrany's teeth were so badly spaced that it was preventing her from eating and talking properly. In partnership with  Don and Joyce Kaplan, from Minnesota, they asked local dentists,Dr Oliverio Soberanis Nunez and his wife Dra Azucena Acosta Mena to examine Amayrany and let them know how the young girl could be helped. With the dentist's help, making room for all her teeth and extensive orthodontic work, Amayrany has a new look and is starting to speak more clearly. Now Sandy and Ron are ensuring that the whole family will continue to get regular dental care. It is exciting to see the change in the young girl and her sisters. 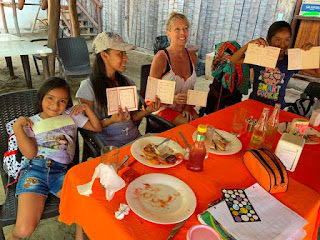 Lisa Marie Lawrence, a retired teacher from Peachland, BC, teaches local children English on the weekends at the beach (she often also provides lunch). The children also practice making and writing thank you cards.  The lessons will help the children if they want to work in the tourist industry. The children all enjoy the classes and Lisa Marie enjoys their company. 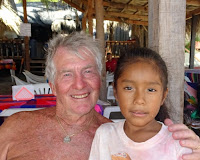 Don Kaplan (AKA Beach Grandpa) periodically buys all the children who gather round him, Respados (AKA Snowcones in Canada). They are frozen shaved ice with flavoured sauce and in Mexico, hot sauce! The children always remember to thank Don and Joyce with a hug.

Tom and Karen Nichols volunteer at a local senior center in town, Asilo DIF. Tom and Ed Forester volunteer at an Addiction Rehab Center in Zihuatanejo and both are volunteers in 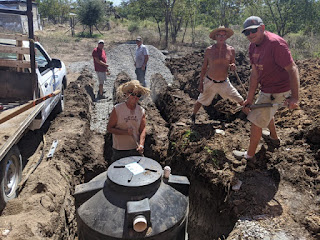 Talita Cumi, an orphanage in a village outside of town (www.talitacumi-mx.org). Ed is involved with building a new septic system for the orphanage. Ed says he is simply a labourer, AKA grunt.

Ken and Barb Stevenson, from Canmore Alberta, stayed this year in an apartment owned by Tim and Donna Melville, active members of Sailfest. As a result, the Stevensons met Dania Maria Ibarez Jaramillo, who is in her second year of International Engineering at Petalan University. They will be sponsoring her for the next two years of her schooling and year of internship. When they discovered that the computer she was using for her school work was shared with her brother and was very old, they arranged through Sailfest President, Carol Romain, to get her a new computer. When Dania showed her mother her new computer and told her about the sponsorship, her mother was overcome with emotion.

Sailfest, a 6-day festival in February, gathers sailors from the US, Canada and even Europe, to Zihuatanejo Bay, and is now in its 19th year. The proceeds from the festival go entirely to the non-profit charity, Por Los Niños in Zihuatanejo (www.porlosninos.com). Sailfest raised $2,200,000 MXP in 2019 and 2020 topped that with more than $3,000,000 MXP raised.
In partnership with local government agencies, Rotary Clubs, international charities, and the local communities, 117 classrooms, bathrooms, kitchens and playgrounds have been built in 14 new schools and expansions have been added to 21 existing schools. To date, 2500 young students have been helped, more than 30,000 school meals a year have been served, and nearly one thousand academic scholarships have been awarded. 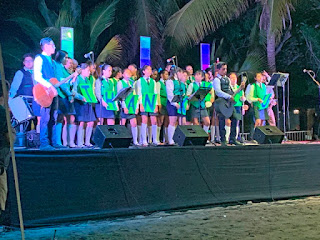 A special treat at the Sailfest Concert, part of the week of activities, was a choir of students from the high school supported by Sailfest, who performed numbers in Spanish and English. 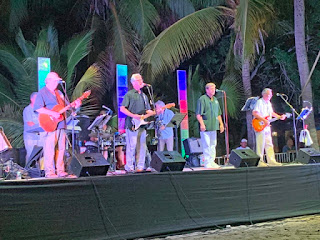 Later, music was by the M-Docks, a band from Springfield, Missouri, who have come every year since the festival's inauguration.

The Sailfest Chili Cook-off is always fun. About twenty volunteers cook their favourite chili recipe. Participants buy tickets to sample the various offerings and vote on their favourite. At the same time, there is a silent auction of jewelry, meals and other items, donated by local businesses, that we all hope to make a contribution with our winning bid.

Every evening, the week before and the week after the official festival, you can donate to the festival and go on a Sunset cruise around Zihuatanejo Bay, complements of the boat owners. 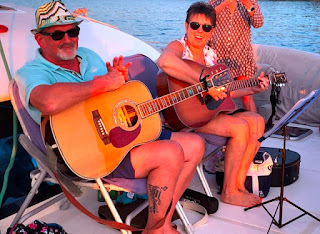 Ray and I opted for the February 14th cruise this year that featured Denise and John, from Cape Breton, Nova Scotia. They entertained the 23 guests on board their guitars and singing many of the familiar Down-East music.

And that is not all. Last Saturday the annual Dance in the Street (Baila en la Calle) was held. The past few years the Red Cross and local firemen/paramedics were recipients of the proceeds to purchase defibrillators. This year the recipients were the orphanage, Talita Cumi and Casa-hogar Bet-Shalom, a home for abandoned and at risk seniors in Las Pozas, a small town near Zihuatanejo.

Money was earned by a $50 MXP donation, 50-50 raffle tickets, which none of us won, donated silent auction items, t-shirts for the event, cards designed by the orphanage children and much more. I entered my name on several silent auction offerings and ended up the winning bidder for breakfast at El Patio, run by Antonio, the son of our landlords, Irma and Jesus, and a dinner voucher from Casa Elvira, a restaurant on the beach promenade. 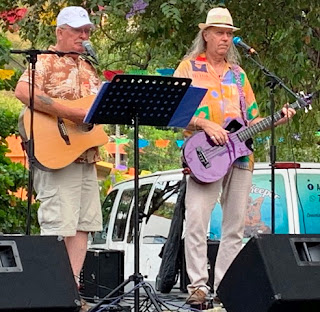 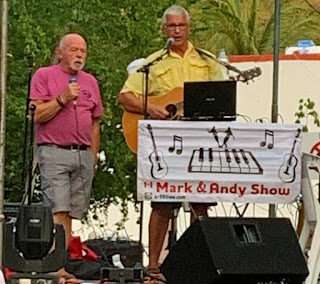 followed by the Mark and Andy Show. Both groups play oldies but goodies, just right for our style of dancing. 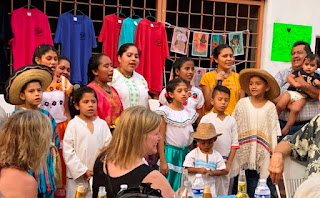 After an intermission, we were entertained first by a choir from the Talita Sumi orphanage.

The local folk dancers were next. First, a group of young girls and their teacher, dressed in Colonial period dresses, performing typical dances of the era. 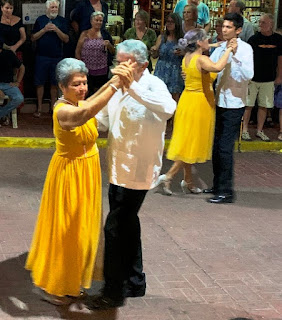 They were followed by a larger group of adults who demonstrated their ballroom expertise. The adults were good, but I preferred the traditional dances they performed last year.

Yes, the events during Sailfest and Dancing in the Street are fun but the rewards truly come when so many children and seniors in the Zihuatanejo area benefit from the efforts of the many volunteers. Every year there are more of the visitors to Zihuanejo volunteering and helping any way they can.

Thank you for sharing all this info. It's good to know, that as well as enjoying all the beauties of the area, that tourists are giving back in helpful ways.