San Miguel in a Changing World 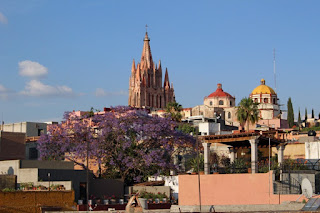 Click San Miguel to see photos of the town

After ten weeks at our favourite beaches, San Miguel de Allende is our culture month, that is, usually. This year was a little different, and I know you all can guess why. The COVID-19 reared its ugly head.

Ateción, the local newspaper, the bible for all visitors and residents in San Miguel, comes out each Friday. We all read it religiously, reading all about the coming events in town and choose which one we just must attend. There are the latest films, discussions, concerts, plays, art exhibits, house tours and much more scheduled at the Biblioteca and theatres in the area. We coordinated dates of events that others in our group of friends were planning to attend, made reservations and bought tickets for our choices, including some for later in March.

I signed up for yoga classes, led by Alejandro at Hotel Posada de Aldea, near our home, on Monday, Wednesday and Friday mornings. Tuesday and Thursday mornings was Aquafit classes, also at the hotel, led by my favourite instructor, Eréndira. I worked on keeping myself fit and Ray got his exercise taking longer walks and visiting the markets to buy our food.

We enjoyed a Flamenco Dance performance, and later, a Jazz concert the Angela Peralta Theatre. A real treat this year was the Reel-Docs documentary series at Santa Ana Theatre. The Documentaries, organized by the Reel-Docs volunteer group, are so popular that the series sells out almost as soon as the program for the year is announced in January. The popularity is in part because the films have such eclectic, interesting topics and the filmmaker is always invited to San Miguel to answer questions about making the film, the issues brought up in the film and what follow-up is expected. It adds an extra dimension to the film. We saw Renegade Dreamers, contrasting protest musicians in New York City in the 1960’s with the current crop of protest musicians in New York. Incarcerated Rhythm, a 2018 documentary, highlighted six men in a medium security federal prison in upstate New York, participating in a unique rehabilitation modern dance program. Both films were excellent.

By the first Wednesday we were starting to get inklings of what was happening in the rest of the world, how it was affecting San Miguel, and therefore us. It wasn’t that we hadn’t heard about COVID-19, it was just that it seemed to be more of a problem in other countries, not in San Miguel. In fact, it hadn’t affected Zihuatanejo, where we spent the previous five weeks, either.

We were notified that the first of the Pro Musica classical concerts we had planned to attend the next Sunday, was cancelled. The reason was that the musician, Ran Dank, was ill. Little did we know that this was just the first of many cancellations of events we had expected to attend.

We emailed the owner of the house we were renting to tell her we definitely wanted to reserve for March of 2021. She replied that, unfortunately, the house would not be available next year as she was moving back to live in the house herself. That meant we had to find another place to rent. We spent the next week browsing multiple online listings and contacting the owners to ask for a viewing. San Miguel is a walking city, so travelling to see rental units brought us to both favourite older areas and new ones that were fun to explore. Even still, we were relieved to finally find one that suited us and was still within our slightly heightened price range. It is a newly renovated small house, managed by a woman who takes care of many of the rentals where the Andrews stay. It was in the central core, was well furnished and equipped, plus it had enough room for us not to feel cramped for space. We reserved for March 2021. 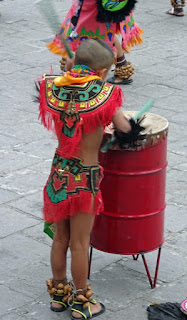 There were more bright spots to lighten our spirits. The first Friday of March is the celebration of Our Lord of the Conquest. Indigenous people from towns near and far come every year to dance on the streets surrounding the Jardin. The dancers, called concheros, wear elaborate feathered headdresses and richly patterned pre-Hispanic outfits. They dance to the beat of drums from early morning to late afternoon. I can’t resist the colour and symbolism of the ceremonies and the sheer energy of the dancers and drummers. It is one of my favourite photo ops. One of the groups performs dances symbolizing the struggle between good and evil forces, with the good always winning. The day also signifies how the ancient beliefs of the people have combined with their conversion to Christianity. Each group in its turn, burns sweet grasses in front of a small altar during the dances and ends with everyone streaming into the Paroquia Church to be blessed by the priests.

Our group of friends continued gathering each Friday for lunch at Oso Azul (blue bear) restaurant. As many as 16 of us gathered to enjoy a meal together and catch up on the latest news. The restaurant has lunch entertainment by a good Mexican woman playing her guitar and singing favourites. The only problem is she had to compete with everyone talking at once.

We even managed to host a “Cinq a Sept” at our house for a late afternoon party. We raised a glass of wine or beer to our friendship and passed around the many appetizers contributed by each of us. We were glad that everyone was able to come as it would not be long before each of us made plans to return home earlier than planned.

As we entered our second week in San Miguel, activities and events were beginning to be cancelled.  All gyms, pools, language classes, art galleries, restaurants and bars were starting to close. Trudeau made a plea for all Canadians to return home. We, along with all our friends, came to the same conclusion. We had to make serious plans to return home earlier than we had planned.

On the same day that we started to look at alternate flights home, our original flight with Aeromexico for March 30 was cancelled. We couldn’t reach the discounter with whom we booked our March 30 flight so we booked another flight for Sunday, March 23 with Air Canada, as they were guaranteeing that there would be no charge for flight changes. We would deal with any refunds or credits for the cancelled flight later.

Just a few days before our planned March 23 departure, our flight was cancelled. We had no choice but to reach Air Canada by phone and stay on hold until an agent answered. We were checking available flights online only to discover the flights were no longer listed the next time we looked. Ray suggested we just book the first available flight listed, even if it was more expensive. We booked a flight for departure March 25. About an hour after we booked the March 25 flight, we reached an agent. It took some explaining but all went well. The agent agreed that the flight for March 25 could be cancelled as it was made just an hour ago, besides, she told us, the March 25 flight was also in danger of being cancelled. The agent suggested a flight departing Mexico City early in the morning of March 21. The flight went to Ottawa via Vancouver, rather than Toronto for Saturday March 21, meaning we would get into Ottawa at 1 AM Sunday, March 22. We quickly agreed on the option.

Everything worked as planned. Since our flight was scheduled to leave Mexico City at 5:25 AM, we took the bus from San Miguel de Allende to the Terminal Norte in Mexico City on Friday afternoon March 20 and took a taxi to the small hotel we booked within walking distance of a walkway over a highway direct to the air terminal. We were up the next morning at 3 AM and walked across to the International terminal. We had been warned by one of our friends who flew home to Canada just a few days earlier that no food would be served on our flights. Therefore we were pleasantly surprised to find that several of terminal restaurants were open to serve breakfast to the relatively small number of travellers with early flights. Our flights were on time and uneventful. We had lots of time, about 8 hours, in the Vancouver terminal to find food to eat and phone all our friends and relatives who live in the Vancouver area. It was 1 AM on Sunday when we landed in Ottawa and taxis were waiting to get us home. Yes, we were tired by the end of the next day, but that was OK, we made it home safely, and still in good health.

Now we are getting used to be self-isolated in our home. We have neighbours who have kindly bought food for us that we needed until we could get a larger food order delivered by Loblaws new service. I am trying out a virtual yoga class, since all live classes and gyms are closed. It is taking a bit to get used to but I am sure it will help me keep fit.

And what are our plans for 2021. It is our wish for us all to stay healthy and for the COVID-19 to have run its course by the end of 2020. Ray and I, and all our friends, have reserved to visit Mexico again next year. For Ray and I, that means stays in Puerto Morelos from late December to late January, Zihuatanejo in February and San Miguel de Allende in March.

Posted by Jeanne and Ray at 9:01 AM No comments: